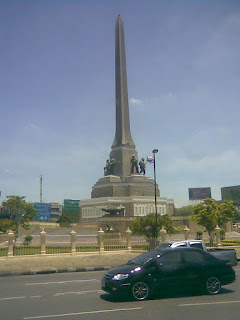 The other day I posted about this Victory Monument when we visited Bangkok last week. I had searched in google for the history and I found this: 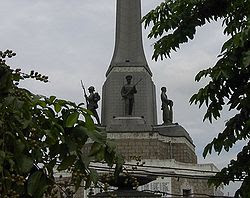 Victory Monument (Thai: อนุสาวรีย์ชัยสมรภูมิ, Anusawari Chai Samoraphum) is a large military monument in Bangkok, Thailand. The monument is located in Ratchathewi district, northeast of central Bangkok, at the center of a traffic circle at the intersection of Phahonyothin Road, Phaya Thai Road, and Ratchawithi Road.
The monument was erected in June 1941 to commemorate the Thai victory in the brief war with the French colonial authorities in Indo-China, which resulted in Thailand annexing some territories in western Cambodia and northern and southern Laos. These were among the territories which the Kingdom of Siam had been forced to cede to France in 1893 and 1904, and patriotic Thais considered them rightfully to belong to Thailand.
In fact the fighting between the Thais and the French in December 1940 and January 1941 had been brief and inconclusive. Only 59 Thai troops were killed, and the final territorial settlement was imposed on both parties by Japan, which did not want to see a prolonged war between two regional allies at a time when it was preparing to launch a war of conquest in South East Asia. Thailand’s gains were less than it hoped for, although more than the French wished to concede. Nevertheless the Thai regime of Field Marshal Plaek Phibunsongkhram decided to celebrate the war as a great victory, and the monument was commissioned, designed and erected within a few months.
This is the history of Victory Monument in Bangkok, Thailand.
http://feeds2.feedburner.com/blogspot/WtVq