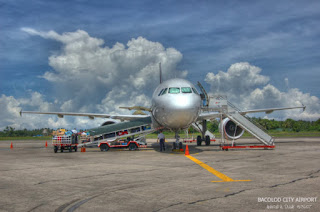 This is our Bacolod Airport in the Phil. Maybe in the future this would become an International Airport for tourists to travel from country to country and visiting our quiet city. It’s not crowded and it has different views for you to enjoy especially for the nature lovers.

For those who would like to visit Bacolod City. It was transferred to Silay City since the airport in Bacolod is quite small and cannot accommodate a huge number of people.

Bacolod -Silay airport is located 9 miles from Bacolod City, Philippines. There are many ways to go to the airport. You can take a van, a taxi, a jeepney going to Silay City or a car owned by your family or friends. There is a multi -level passenger terminal to different locations either in Lopues East, SM, Bangga Cory or in any place where you are located. It only serves domestic flights although it was already declared as an International Airport by the Civil Aviation Authority of the Philippines. It is interesting to note that it was funded by Japanese companies.


The airport serves it purpose in helping the province especially in the vicinity of Bacolod and other parts of the nearby cities like Talisay, Silay and the neighboring towns and places. Bacolod is known for it’s MassKara Festival sometime in October. It is known as the “City of Smiles”.


You can take a jeepney to Northbound Terminal, when you reach Silay City, you can ask any tricycle for the cheaper price or take a taxi to bring you to the airport which is always available anytime anywhere.